Share All sharing options for: Bubba's Texas BBQ is Open For Business 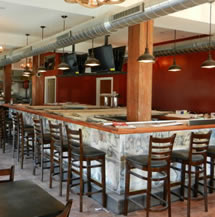 Robert "Bubba" Kolbasowski and Steve Ehrenhalt have finally opened their Fishtown barbecue joint, Bubba's Texas BBQ, after months and months of delays. Surprisingly, the delays weren't some ridiculous bunch of crap that L&I leveled against the owners, but the amount of time it took for welder Barry Robbins to fabricate the custom smoker Bubba required for the restaurant.

Bubba's is focusing on Texas dry-rub barbecue, unlike their neighbor around the corner, Fette Sau (who does barbecue without borders), which opens tomorrow. The menu is broken down into: Nibblers, Sandwiches, Platters, Sides, and Dessert. All of the classic Texas combo traditions are in-tact at Bubba's, which means platters are served with cornbread, Texas toast, and a side. Sandwiches are topped with coleslaw, and paired with pickles and a bag of chips.

Almost overnight, Fishtown has become the site of a BBQ version of the Battle of Gettysburg. There will be plenty of piggy casualties, smoke rings galore, and succulent charred flesh for everyone.