Share All sharing options for: Fette Sau Opens Tonight at 5 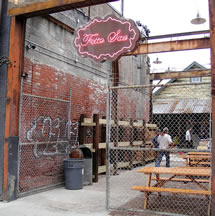 The long-awaited Fette Sau is finally opening up to the public tonight at 5 p.m. at 1208 Frankford Ave. Co-owners Stephen Starr and Joe Carroll surprised the whole NYC/Philly corridor about four months ago with the announcement that they would be teaming up to bring the BBQ mecca to Fishtown. Progress has been moving along at an intense clip since then, leading up to the big moment tonight when everyone will finally get the chance to see what all the fuss is about.

Starr & Co. have created an almost identical space (with the addition of much more seating) that resembles a shotgun shack and an outdoor patio for happy diners. Carroll's menu isn't strictly Texas-style, but the focus is on dry rub, and not heaps of sloppy sauces. There's even a few menu items that will only be available at the Philly outpost. Add in a good amount of whiskey and local craft beer, and Starr and Carroll will surely have a hit on their hands.

The menu changes daily (and sometimes throughout the night), so there's no definite lineup of food at any one time. But, the list below is the one they'll open with at 5 p.m.

· All Fette Sau Coverage [Official]
· All Openings on Eater [~EPHI~]