Chris Painter on Year One at Il Pittore

Share All sharing options for: Chris Painter on Year One at Il Pittore 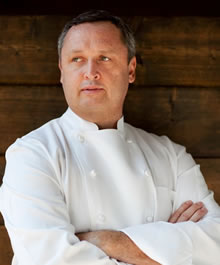 Chef Chris Painter has been a fixture in the Philly dining scene for quite some time. His name has been on the masthead of some of Philly's best-reviewed restaurants, mostly within the Stephen Starr empire. When Painter opened Il Pittore, though, it was his chance to shine on his cooking talents alone, along with the support of Philly's most successful restaurateur. The reviews have been nothing short of glowing, and Il Pittore is buzzing almost every night of the week even though Philly is drowning in a sea of Italian restaurants.

Eater sat down with Painter to talk about how Il Pittore came to be (it was almost a revival of Starr's beloved Blue Angel), the evolution of his relationship with Stephen Starr, and what voids he hopes to fill in the future of Philly's white-hot culinary scene.

When did you and Stephen Starr decide to do Il Pittore?
It's the whole reason I came back to Starr Resturants. I started here in 1999, and left in 2004. I was gone for three years, and then Stephen called in 2008 to bring me on as the corporate chef while we figured out what we were going to open. And, about a month after I got back the economy collapsed.

The original plan was to do something really high end in a very small space, but considering everything that was happening, it wasn't a good idea at that point, and I completely agreed with that. We were shooting for the stars, looking at a $125 check average with about 40 seats, and it wouldn't have been a smart move. So, I did the corporate chef thing for awhile. But that wore on quickly, and I finally said to Starr it's now or never, and he agreed. So, we found a spot and we did it.

With your work as corporate chef, you touched on many different cuisines. How did you settle on Italian for your own place?
My two favorite cuisines are Italian and French food. And I think they're the most rewarding to cook, too, so that pushed me in that direction. And, at the time, the Italian places were popping up in NYC and they were hot. It was never like I needed an Italian place, but it was going to be one of the two things. And even with the economy where it was, people still understood Italian food. Maybe not the exact kind I was doing, but Italian in general, will always be a comfort food.

What sets Il Pittore apart in terms of cuisine?
I wanted to do the modern interpretation of Italian food, and more northern-focused cuisine. People are used to the Italian-American food from the south, and that's what we didn't want to do.

What were some of the challenges you faced in that first year?
(Laughing) Well, the kitchen itself is very, very, small, which we didn't really notice. There's no basement, which means no storage, so that adds a layer of difficulty. Our walk-in, we have only one, and it's the size of a closet. We can only prep like one day out, too, where most restaurants can prep for up to three days. In a lot of ways that's good, because the freshness is unparalleled with the food, but when you hit the weekends, it can be a struggle.

The positive we didn't expect was bringing in a completely different clientele than we normally get at Starr restaurants. Il Pittore is completely chef-driven as opposed to other concepts that might be design-driven, and we get more adventurous eaters, people ordering different stuff every time they come in.

Stephen is very hands on with most of his restaurants, including in the kitchen. Since you guys worked for so long together and in that same capacity, was he less involved with your project because of your relationship?
I think we both knew it wouldn't work if that was the case. I think it's something we wouldn't have decided to do if there would be the constant scrutiny. Doing it as a corporate chef, you can distance yourself from the project, because it's what you're tasked to do, and it's his restaurant. This restaurant has my name on the door, and if I'm putting my name on it that's how it has to be.

Stephen has been really good about it since day one. Like any other restaurant opening, things can get brutal, but we haven't had any issues. I change the menu quite often, and he doesn't say anything about it. As the corporate chef, we saw each other every day. Now, it's not nearly as much.

Critic Craig LaBan has been a fan of yours for quite some time, and with you running the show this time around, did you notice any difference in his review than with other Starr restaurants?
Not really, but outside of the times he's reviewed a restaurant, I haven't ever talked to him. I feel he has always been fair to me, and actually he's been good to me, but it didn't feel any different to me when he reviewed Il Pittore. I guess in the back of their mind they know it's a Starr restaurant, but I didn't get any different vibe in the process or how it read.

But, I think he enjoyed that the menu was different each time he came in, and we were focused on food and not the design so much, with a pretty eclectic wine list. At least I hope he did.

You keep mentioning European food. And the most beloved and missed restaurant Starr ever closed was Blue Angel. Would that be a possibility?
It was talked about. In fact, we talked about doing that before Il Pittore. I love that style of food. I would love to do the modern French bistro. I would love to do a small bistro. The real deal. People forget that Blue Angel closed because people stopped going. I don't know whether it was the constant chef changes. But, they stopped going.

But, Il Pittore is now running on all cylinders, we've got the right crew in place, and the food is where it should be. So, maybe it's time to start thinking about that next one.

So, is there anything left to complete at Il Pittore?
Well, I am into grinding away, but I like to move stuff forward. I never think that the menu is complete. So, I will never be satisfied. But, how can you if you're serious about your restaurant? I think we're going to get a tasting menu going soon, which is the next step for Il Pittore.

Expand a little on what you mean about pushing forward?
I think it relies on the economy coming back, and I think it will, but I believe Philly needs more finesse food, and I think it'll be here. It's been talked about for awhile, but I think we're ready for some new high-end food, some new finesse concepts. Someone needs to step up and do it. I would like it to be me.