Share All sharing options for: Spike Mendelsohn Headed for Philly? 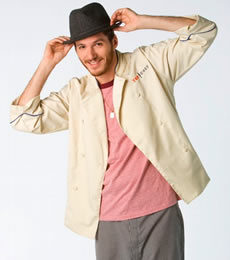 There's been a whole bunch of will-he-or-won't-he in regards to former Top Chef Spike Mendelsohn opening up in Philly, but the premiere episode of Life After Top Chef had more than one instance saying it's imminent.

Near the beginning of the episode there was a scene in Mendelsohn's "home office," where the family was discussing the expansion of his brand. At one point his father said there was a guy in Philly who was "ready with money on the table." Closer to the end of the show, the foursome was having dinner after the big Food & Wine Classic at Aspen when the discussion turned to Spike's mini-empire. Jen Carroll asked him if Philly was on the list, and he said that it was definitely in the plan.

What's still up for debate is which brand Philly is getting, but Mendelsohn kept mentioning his new steak-frites concept, Bearnaise, which is launching in D.C. shortly. Stay tuned.