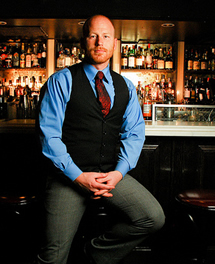 In a bit of shocking news, managing partner Mike Welsh told Eater tonight that he has left Franklin Mortgage & Investment Co., Philly's most critically acclaimed watering hole. Welsh said that the split is amicable, and it was time for him to get out on his own after being the face of the ownership group that also has stake in Lemon Hill in Fairmount, and the St. Charles Exchange in Louisville, KY.

"I just signed on to get the bar program of Terence Feury's Tavro 13 up and running, and got a few other things in the fire as well," Welsh told Eater. "The Franklin experience was amazing in every way, but it was time to move on. And I have plans for my own spot here in Philly, too."

While the news for The Franklin is not so great, Tavro 13 adds yet another big talent to the roster that already includes Feury and Meme's former chef/owner David Katz.