There's Another Resto Coming from the Le Virtu Crew

Share All sharing options for: There's Another Resto Coming from the Le Virtu Crew 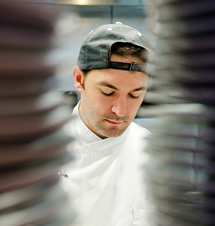 Joe Cicala, executive chef of Le Virtù, has been on an amazing trip through Italy and tweeting up a storm and making everyone in Philly jealous with the beautiful shots of stuff he's eating. Today, though, Cicala dropped a bombshell by casually announcing that the Le Virtu crew is working on a new concept.

Cicala has mentioned the possibility of another restaurant in past interviews, and it's not too big of a shock that they're working on something new after having so much success with Le Virtu. But, now that it's out in the Twitterverse, that means it's the truth, right? Right.

[Photo: I'm In the Kitchen]