The Winner of Philly's Best Cocktail

Share All sharing options for: The Winner of Philly's Best Cocktail

We're just about at the end of Cocktail Week, and that means it's time to name the winner of The Golden Shaker, given to the best cocktail in Philly. After taking nominations all week, we came up with 10 boozy concoctions that represented the best drinks in town, made by the very best bartenders around.

Philly is just now hitting its stride in the world of cocktailery, and our bars are starting to get the attention of national magazines, just like our restaurants did a few years back. For the longest time, the Southwark was the only Philly spot that focused on craft cocktails, and now they're everywhere.

After putting them up to a vote, three cocktails made it to the finals: The Antho from Opa (Cucumber vodka and lemon, with dill), and Henry "Box" Brown (Fresh-squeezed red grape juice and El Dorado 15) and The Montana Payback (Laird's Bonded with El Dorado rum, fresh strawberries, lime, Thai chiles, falernum, and cream), both from Hop Sing Laundromat. 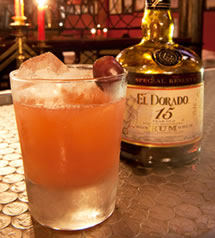 And the inaugural Golden Shaker goes to the Henry "Box" Brown from Hop Sing Laundromat.

Why It's a Winner: The Henry "Box" Brown is a simple drink, made from only fresh-squeezed grape juice and rum. It came from the mind of Philly's most controversial bar owner, Lêe, and is served at Philly's biggest love/hate cocktail spot, Hop Sing Laundromat. It's deceptively delicious, and works with any season. And for all the intricate details that make up the interior design and service at HSL, no one would have guessed that their very best drink is made up of just two ingredients. Congrats!