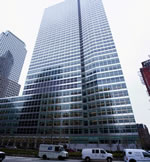 El Vez joins Buddakan and Morimoto on the list of Stephen Starr Philly joints that are getting the NYC treatment. As with everything New York, it's going to be big, and that means 200 seats for the version up north. Starr says the restaurant is moving into the Goldman-Sachs building in Battery Park City, next door to Danny Meyer's Blue Smoke. The other two joints have done quite well, so there's no reason to believe this one won't give Starr another big hit. [~ENY~]