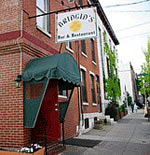 Bridgid's in Fairmount has just announced that chef Peter McAndrews is overhauling the menu. Bridgid's has always been on the right track with the beer offerings, in fact it was one of the first within the city limits to go all craft brew long before it was cool to do so. McAndrews (Modo Mio, Monsu, Paesano's) is pushing the menu into more Italian territory, which is his wheelhouse, after all. [Foobooz]