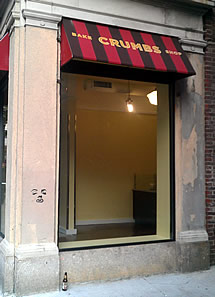 Crumbs Bake Shop is set for a soft opening on Monday, December 10, after countless delays. There was even talk of the deal being dead earlier this summer, after the CEO was replaced by Julian Geiger, who just happens to be the man in charge of clothier Aeropostale, as well. Crumbs is moving into 133 S. 18th St., the space across the street from Bryan Sikora's a.kitchen.

Crumbs, which started up in NYC almost a decade ago, announced that they were opening a Philly shop more than a year and a half ago, but construction started and stopped numerous times during the process. But, now they're finally ready to go, and join other local outposts in King of Prussia, Ardmore, and Cherry Hill, NJ.

In addition to the full-line of flagship cupcakes that are readily available, Crumbs features a build-your-own cupcake bar for those customers who feel the need to ratchet up their sugar intake up to dangerous levels.