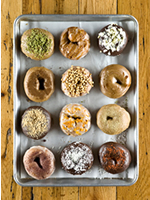 We've been hearing that "Federal Donuts 2 is much closer than you think" for a few weeks now within the Steve Cook and Mike Solomonov ranks, and this morning Foobooz is rumoring Solo and Cook are expanding to the Main Line. We've already seen Percy Street BBQ 2 open up at the Comcast Center, so we're going to take the easy money and say the doughnut and chicken hut is headed to the 'burbs. We'll bet against Zahav, as it isn't Zahav without Mike's beating heart by the hearth. Long money is on Solo opening a deli, which would play well on the Main Line. Supposedly, real news is coming soon. Stay tuned. [Foobooz]