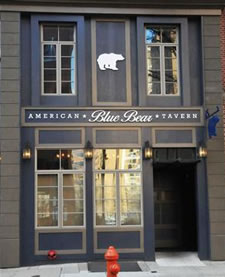 We heard rumblings over the last few weeks that the Blue Bear Tavern was going to shutter, and it finally happened this past weekend. The long-in-coming and then short-in-living Blue Bear was part of the Vesper Hospitality Group (Zavino). Eater Philly has been told that the Farmer's Cabinet crew has taken over the Blue Bear space and is re-imagining it as some sort of Southern-food bar. Whether Matt Scheller, the face of the F-Cab operation, is involved is not known, but surely owner Matt Swartz is behind the new Cabinet space.

While we're on the subject, we're also hearing that the disappearance of F-Cab cocktologists Phoebe Esmon and Christian Gaal was because the Tiki-beer hall they had planned for 6th and Spring Garden is dead. Eater was told by numerous chefs around town that the Swartz's approached them to run the kitchen in a deal "that was too good to be true." We guess it was. It's actually a good thing this place didn't pan out, as it would have ended up being nothing more than a shooting gallery for patrons of The Palmer Social across the street.

UPDATE: Operations Manager Will Pumphrey Confirms that Matt and Colleen Swartz, and Matt Scheller are taking over the former Blue Bear Tavern. Details to come.