Stephen Wambach Out as Chef of Barclay Prime

Share All sharing options for: Stephen Wambach Out as Chef of Barclay Prime 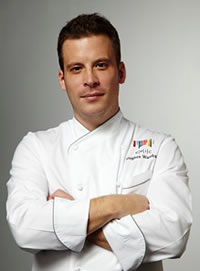 We just got word that Stephen Wambach is out as executive chef at Stephen Starr's opulent modern steak house, Barclay Prime. Whether or not this departure had anything to do with critic Craig LaBan's recent two-bell re-review of Barclay Prime has yet to be seen, but we're sure it didn't help. LaBan chastised the kitchen for their broiler ineptness, destroying otherwise great pieces of beef, which as you'd imagine, should be the star of the show at a steak house. The review also reveals that while BP's prices remained sky high, they started purchasing less-expensive wet-aged cuts. That nugget of info becoming public knowledge probably also assisted in Wambach's ouster, if we're being honest.

We really loved BP in it's heyday (couldn't find a swankier spot and better piece of beef in 2005), and hope Starr can right the ship over there, as this will mark the third exec chef in a little over a year at one of the crown jewels in the SRO. With the recent crop of corporate chain steakhouses engulfing Center City, it was nice having a local concept be the best of the bunch, and a place to send out-of-towners in need of a mid-rare rib eye. While the economy isn't what it once was, there will always be the need for a steak house done right. Bring it back, Stephen. Philly will jump on for the ride, we're sure of it.