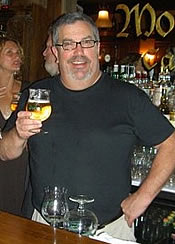 As the Pliny the Younger madness hits fever pitch this week, we're happy to pass on some good news from the donations front. This morning at 11:30 AM, Tom Peters tapped his keg of Younger at Monk's Cafe, where they were selling the triple IPA at $15 per glass, and had a raffle going with prizes that included four baskets full of fantastic donated rare brews. As of this post, Peters has raised just under $15,000 for Alex's Lemonade Stand, the good folks fighting against childhood cancer. Peters mentioned that Vinnie Cirluzo, the brewer of Pliny himself, has donated $5,000 to the cause. We at Eater HQ would like to raise a glass to Mr. Peters, who is one of the most generous people we've ever met, not just in the bar business, but in the life business. [EaterWire]