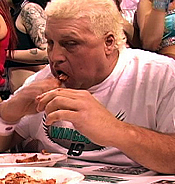 Famous local competitive eater El Wingador is calling it quits in the world of Wing Bowl. The Insider is reporting that Wingador, also known as Bill Simmons, is done on the gobbling circuit and will be focusing on the side projects that his gluttonous celebrity has afforded him. We can expect a line of specialty sauce making an appearance at local Acme stores soon, as well as a possible local franchise of El Wingador Challenge Grills that would host a weekly eating competition. For as much as Americans bitch about being overweight, it sure seems that being fat is an easy way to become famous in 2012. [The Insider]