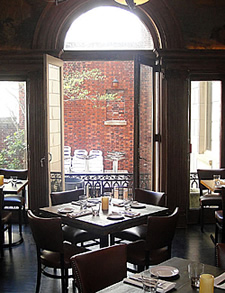 Nick Elmi didn't sit around too long after his departure from the now-shuttered Le Bec-Fin, as his next stop, Rittenhouse Tavern, opens tonight in the former Gardenia space at The Art Alliance on Rittenhouse Square. Elmi is working alongside Ed Brown, the Michelin-starred chef who Restaurant Associates (the ownership of the concept) tapped to join the crew as a "chef collaborator."

The restaurant is open for dinner Tuesday through Sunday, and lunch and brunch are in the works for the future. Rittenhouse Tavern is closed on Monday. Elmi's new menu has some French influences, but his cooking is much more modern American, with dishes like amish chicken, skirt steak, and a green bean salad. Make sure your wallet is stuffed, though, as dishes can get pricey for the larger bites. The outdoor patio will be open later in 2012.