Boot & Saddle Gets the Go Ahead in South Philly

Share All sharing options for: Boot & Saddle Gets the Go Ahead in South Philly 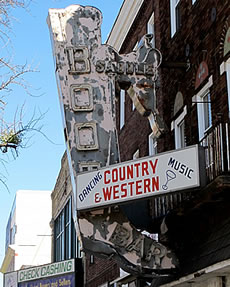 Meal Ticket is reporting that Avram Hornik (Union Transfer, Morgan's Pier, Ortlieb's) got a big thumbs up from the Zoning Board of Adjustment to re-open the Boot & Saddle, the iconic former live music venue located on South Broad Street which has been dark for more than a decade.

Hornik is teaming up with R5 productions (also his partner at Union Transfer) to book music acts for the Boot & Saddle. Most importantly, Hornik is keeping the giant neon boot sign that hangs from the side of the building.

The neighborhood association originally fought back against the idea of bringing the bar back to life, but Hornik promised the locals that the noise wouldn't be a problem, guaranteeing that live music would be done by 12:30 every night, and that he would upgrade the soundproofing of the walls inside the establishment. Hornik has announced that the bar will be open from 5 P.M. - 2 A.M. daily, and feature brunch on weekends.