Share All sharing options for: Jen Carroll Starring in Life After Top Chef 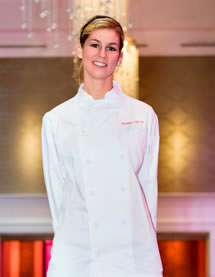 Bravo TV announced a new series called Life After Top Chef, where four of the "most beloved cheftestants" are followed by TV cameras documenting their, well, life after Top Chef. Local lady Jen Carroll is one of the four folks starring in the show, along with fan faves Fabio Viviani, Richard Blais, and Spike Mendelsohn. This is probably Bravo's worst-kept secret, as Carroll was spotted on many occasions being followed around by a serious film crew.

Carroll, who is currently working on her new venture Concrete Blonde, has been traveling all over the country with the cameras in tow, including very visibly at the Charleston Food and Wine Festival and the Rogue Sessions in Washington, D.C.

Carroll is in-between shooting right now, but told Eater she will be back in front of the camera for three more weeks by mid-month.