Share All sharing options for: Overrated: Lorenzo's on South Street 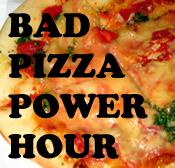 Everyone in Philly has ended up at Lorenzo's after a show at the TLA, standing in line to get a giant slice of pie from behind the counter. $2. No toppings, and don't ask any questions. Lorenzo's is an integral part of a ritual that all out-of-towners seem to follow. But, when we asked local food writers which pizza was the most overrated in Philly, the answer came up the same every time: Lorenzo's on South Street.

"I imagine there's high turnover at Lorenzo's from so many pie-makers offing themselves for making the same flavorless pizza in 12-hour shifts," said one local food journalist that wished to remain anonymous. "It sucks, it's greasy, and there's a reason people wrap it around a cheesesteak as a stunt food. Because they're hoping to find some taste in a triangular shaped rug with cheese on it."

Art Etchells, founder of food blog Foobooz, added, "It's sweet sauce suckitude. Undercooked grossness." Adam Erace, critic for the City Paper said, "with slices that large, it's a floppy mess, and I hate floppy pizza. Gross." To some, that floppiness is charming. But to the rest of the world, it's a sign of poor quality. "I don't often eat pizza," said Joy Manning. "But, I know to stay away from Lorenzo's."

Still, you'll find and endless amount of people waiting to get a slice. Most people believe it is a drunk thing, and they cash in on the inability of people to make good choices after too much liquor. Popular local blogger Taylor High of Mac and Cheese said, "The only time a $2 slice of pizza from Lorenzo's on South Street tastes good is when you cannot remember it!"

"Lorenzo's is just the Geno's Steaks of Philly pizza," said anonymous critic #1. "It's for people who don't know any better that don't give a shit if it's good or not. But, I promise, they will be giving plenty of shits about 30 minutes after eating that trash."