Paul Goldberger Loses His Shit Over the Barnes; W Hotel on Chestnut Street

Share All sharing options for: Paul Goldberger Loses His Shit Over the Barnes; W Hotel on Chestnut Street

And now for the latest from our sister site, Curbed Philly, your source for hideous interior design, accusations of gentrifcation, unions and developers wanting to murder each other, and gossip about real estate, neighborhoods and architecture. 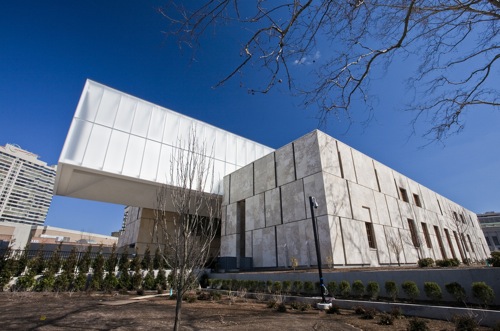 Photo by Laura Kicey
BARNES STORM—When Pulitzer-winning architecture critic Paul Goldberger left The New Yorker to go to Vanity Fair, people reacted like they'd lost Inga Saffron to Gawker. Calm down, everyone. He's got plenty of space over at VF, if his lengthy review of the new Barnes museum on the Parkway is any indication. And he loves it. Like in a way Inga Saffron doesn't.
WEST PHILLY—So you know how Bart Blatstein has this whole plan for North Broad Street? And you know how part of it is to have a rooftop village with a theme of "Old Europe"? (Oh, yes. Yes.) Problem: The West Village at North 48th Street—the new gated community that's not Penn—does not have a theme. Panic button!

CENTER CITY—The W Hotel at 1441 Chestnut Street is a go! Wait! What? It's not? It is? No one's sure? Cripes. Well, we enjoy speculating about hotels that may never be built here. It's fun. That's why we have a bunch of photos up of the W Hotel in other cities—to see what it's going to be like when it doesn't/does come to Philly in 2014. You know, just like the Waldorf-Astoria did/didn't.
RACKED PHILLY—Japanese sundries store Omoi on Pine Street is going through some changes this summer. Plus, another Nordstrom Rack and the very first Longchamp opened this week in our area