Josh Lawler on Year One at The Farm & Fisherman

Share All sharing options for: Josh Lawler on Year One at The Farm & Fisherman 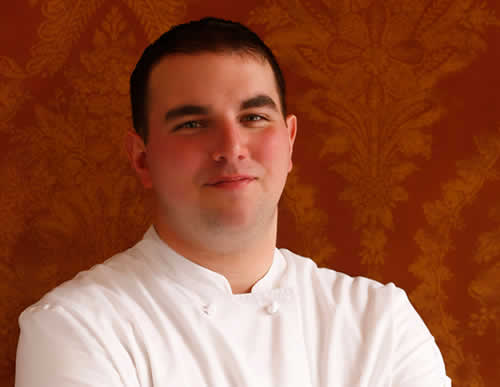 Chef Josh Lawler and his wife Colleen opened The Farm and Fisherman about a year ago, after leaving his position as chef de cuisine at Dan Barber's Blue Hill at Stone Barns. Lawler, who is a Philly local, took over the former Paul space and brought his intense locavore cuisine to a town that was in the middle of farm-to-table over-saturation, and came out on top. In short order, The Farm and Fisherman was receiving tons of critical praise from every outlet. Eater chatted up Lawler about leaving a legendary kitchen, the turmoils of overnight success, and the future.

Right before coming to Philly, you were working as the chef de cuisine at Blue Hill at Stone Barns, one of the best restaurants in the country. Why did you come here? I'm from here. My family is all here, and I had always wanted my own restaurant. So, coming back to Philly was always on the list. I had promised myself I would work one year in New York and then be done. But, I stayed for 10 years. It was time.

Did the availability of the space finally encourage you to leave, or did you leave and then start looking? We were looking at spaces. It used to be Paul, the restaurant across from Effie's. But, the economy was bad and we got a good deal, so we pulled the trigger on it, and got it going. It's worked out great for us. We saved a lot of time and money by doing the construction ourselves, and making it a BYOB. That way, you don't have to go to all of these meetings and deal with the PLCB, which can be a hassle and delay progress.

Blue Hill is known for it's dedication to hyper-seasonality and making the best use of ingredients. Was that always the plan for your own restaurant? I think that you always end up regurgitating what you're comfortable with or what you know the first few months of opening your own restaurant. You find your own footing and ideas as the restaurant develops, and feel more comfortable the longer you're open.

Were you concerned at all about Philly having been hit with too much farm-to-table too fast? No, because you need to do what you're going to do, and see how the public reacts. If you go into your restaurant with an idea, and worry too much about response before you open, that's not going to work. I set out to do what I wanted to do.

Well, it worked out. You got a lot of praise early on. Philadelphia Inquirer critic Craig LaBan gave you 3 bells, even though you were a fairly unknown quantity around here, which isn't the norm. Were you surprised? What was most surprising was how quickly the calls from critics came in to interview me for the official reviews. The review was great, and we were thankful. What we weren't prepared for though, was the rush of diners that follow a positive review.

Did it pose a challenge for the restaurant after the thumbs up from Craig? It did. But, its a challenge anyone would love to have, since it means you're doing something well. But, our kitchen is small, it's just me and one other cook, so keeping the level of sophistication and quality was tough when you have a consistently full dining room. We learned as much about changes needed for the front of the house as in the kitchen, too. But we got it figured out.

Since it's just you and one other chef, was it a more stressful experience for your sous chef, or was it a challenge that they really took to? I got lucky, and had a great sous chef that I hired right away, Pat Szoke, who we only recently had to replace because he got an executive gig. So, not a lot of turnover. It can be tough with very few people in the kitchen. I have a great sous chef now, too, Andy Tessier.

The bloody beet steak was the must-have dish that everyone fell over themselves to get in the early going. Is that still the case? Yeah, it was our star at the beginning, and is still on the menu. We still move a lot of them.

What's the new must-have dish on the menu? We do different preparations with the farm egg that people love. We get some amazing eggs from all over, and we like to change up the menu quite often, and that always includes new ways to create the egg dish.

Now that the LaBan review is behind you, how are the crowds? Do you have a lot of regulars? We have a lot of regulars, which is great. Some people we see multiple times a week, and some of our weekend regulars come in every Friday or every other. We've been quite lucky to have a dedicated group like that.

Your restaurant is definitely a homerun with the locals. Have you thought about expansion yet? Not yet. There have been so many recent great restaurant openings, the time wouldn't be right. We are content focusing on what we have at Farm and Fisherman, and making it the best possible dining experience. It's a lot of work for us, since we have such a small team.

The Farm and Fisherman