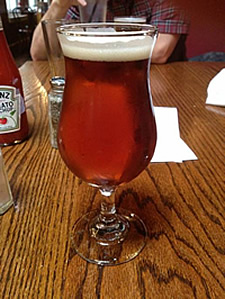 In honor of the Philadelphia Flyers sending their cross-state arch rival Pittsburgh Penguins home, Nodding Head Brewpub has released Crosby Tears, a strong ale made with "whine," in honor of star center Sidney Crosby of the Penguins (who is Philly enemy #1). Brewers Gordon Grubb and Mike Fava started brainstorming on the beer before the playoffs even started, as the teams had more than a few contentious dust-ups at the end of the season.

"Mike came to me and said we should do something for the playoffs, and we hadn't done something strong in awhile, so that made it easy," Grubb told Eater. "It's a strong ale, and I used grape concentration normally used in wine kits, 2 Spanish reds, and a German white, added to the beer to make a unique flavor."

The beer has an 8.7% ABV (in honor of Sidney Crosby's number 87) and is on the menu right now. The flavor profile is low bitterness with citrus and spice, and a fairly big wallop of booze. Grubb said they used house yeasts, and not Belgian, so people shouldn't expect the funk of a traditional strong ale.

"It's good they won, or we would have had to call it something else," added Grubb.

This morning, USA Today picked up on Nodding Head's hard work, and got our local boys a little national exposure that is long overdue. Congrats!