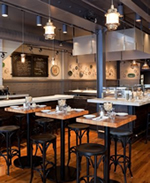 Brett Naylor has taken the helm in the kitchen at the Oyster House on Sansom Street. Meal Ticket is reporting that Naylor, who was the executive chef at the short-lived Les Bon Temps (which later became Tweed), Urban Outfitters, and then Tria, is replacing Andy Kitko, who has moved onto Stephen Starr's steak-ery Butcher & Singer. No word on if Naylor will be updating the menu when he takes over the job next Monday. [Meal Ticket]