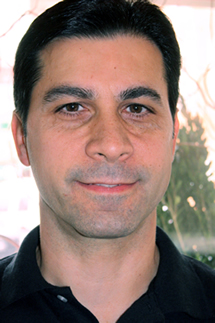 The name Santucci has held strong for decades in Philadelphia when pizza is discussed. Alongside Tacconelli's, the Santucci's established themselves as one of two royal families of pie that still stand at the top in 2012, while pretenders to the throne have come and gone for the past 30 years. Originally only a known quantity in the Northeast, the Santucci's recent invasion of South Philly put them on the map with local critics and a new generation of pizza-obsessed denizens below South Street. Eater chatted up Frank Santucci, Sr., the patriarch of the clan and the pizza-maker at the newest storefront.

How long have you been making pizza? Since 1974, so 38 years. I started at the first store in Juniata Park, on O Avenue. Our whole family all spread out and each opened our own pizza shops, but they aren't all the same.

What's in the dough recipe? I can't tell you what our seasonings are. It's a family secret. I make up a bag of seasonings for them to add to the flour, but that stays with the family. Other than that, it's just the basic flour and yeast. Our pizzas are square, we do them in a pan. That's our signature pie.

Alicia Santucci: (daughter of Frank, and owner of the 10th and Christian store): Even I don't know the recipe. He hasn't taught me. Someday he will, but not yet.

So you truly believe in the secret recipe concept? Yes, we do. And we have not changed the recipe since my father developed it. Other people have changed it up in the family, but we kept it the same. Times change, equipment changes, and you're tempted to change the recipe. It's hard not to. But, we've stuck with the exact same recipe for our dough. We didn't alter it one bit. And, it really does make a difference. You learn to work with the equipment, but you don't mess with the recipe. And when you read the pizza magazines and go to the pizza conventions, people are trying to get you to use their products.

You read pizza magazines? There is a pizza convention? Absolutely. In fact the pizza convention in Las Vegas is the second biggest expo, behind the healthcare expo, in the country. They want you to try their new additives to make your pizza crispier, and to make your sauces brighter, and we've never tried any of them. Sadly, a lot of people use these things now, and you would be really surprised how many of these additives show up and change people's ways of making pizza. There's no need for any of it.

So who else knows the secret recipes? My youngest son, Anthony, who is going into the business knows the recipes. My older son is going to school for law, so he isn't going to be a pizza maker. He doesn't need to know (laughs). And, I will teach my daughter at some point. She's just been too busy keeping the books and all of the employees in line. That's a full-time job. (Ed.- She's also a new mom)

How is your sauce made? Just like the dough recipe, it hasn't changed since I learned so long ago. When it comes to your sauce, and your cheese, you gotta spend the money on good ingredients. That makes a difference. Even when reps try to sell you on a non-brand version of tomatoes or sauce and say you'll save 5 bucks per case, it can add up to a pizza shop. But, if you want to stay around in this game, and you want to make a good product and not just get by, you stick to your guns. My dad taught me a lot, but the most important thing I learned is "your tomato sauce comes from California, and your cheese comes from Wisconsin." And yeah, every state makes cheese, and grows tomatoes, but the best are the best. And that's a truth that hasn't changed for 30 years.

Why do you put the sauce on top? It looks good, sure, but in terms of taste, it's a better option to have your sauce cooked. That's what we believe. When the cheese is on top you don't know if your sauce is cooked through, and with the high acid content of tomato sauce, it can make people stomach sick or give you indigestion if it's not done all the way through. Our sauce is bubbling hot when it comes out of the oven.

What kind of oven do you use? We use a gas powered Blodgett. Back when everything started there were only two options. A Baker's Pride or a Blodgett. We use a deck oven. I remember the big technological advancement at the time was this conveyor belt oven that would cut the time down in half, and you could make pizza three times as fast. But, it required you to change your recipe and cooking times, and that kind of stuff. We stuck with what we liked, and it's worked out for us.

You made such a name for yourself in the Northeast. What was your reception like when you opened in South Philly? I'll let Alicia answer this, since it's her restaurant.

Alicia Santucci: We almost didn't call it Santucci's, because we thought the name didn't have any clout down here. And, we wanted to do a new concept where we had a whole menu and not just pizza, so we didn't want people to get confused. But, we quickly found out a lot of former Northeasters moved down here when they grew up, and brought their love of Santucci's. So, it's been great. We're quite happy to be a part of this neighborood.

Will you be expanding? AS: Yes, we will. There's no plans yet, and we still have to get the outdoor patio opened up, but there's a good chance it will happen in the near future.

What is the most popular pizza? It's always going to be the original, but pepperoni is the next, by a large margin. Pepperoni has always been the most popular topping. Even with all the changes in our business, and tastes, it's still pepperoni. I'll bet it will be for a long time.

Do you eat pizza anywhere else? No, we don't. And it's not because we don't like other pizza, but what's the point when you work in a pizza shop? You're surrounded by it. When we go out we want to eat other stuff.

What's the hardest part of making pizza? No matter what you sell in one day, you're going to have to come back tomorrow and make at least that much dough. Every day, that's your charge. And it never stops.