Barra Quietly Opened While No One Was Looking

Share All sharing options for: Barra Quietly Opened While No One Was Looking 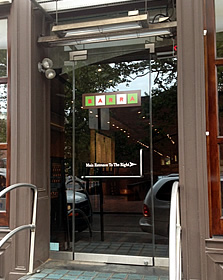 While restaurateur Gordon Dinerman was working on the Fountainhead Saloon, he quietly took over 239-241 Chestnut Street from Rob La Scala, which was Dolce and Paradigm for many years, and then Azione and Rocchino for about 6 months. Dinerman, who found success with Birra on East Passyunk Avenue, re-opened it last night as Barra before anyone even noticed.

The menu from Birra is pretty much duplicated at Barra, with the addition of some steak dishes, new pastas, and a bunch of signature drinks. The neighborhood demographic is all over the map depending on the time of day and day of the week, but the pizza and beer concept works no matter where you put it.