David Fields on Year One at A. Kitchen

Share All sharing options for: David Fields on Year One at A. Kitchen 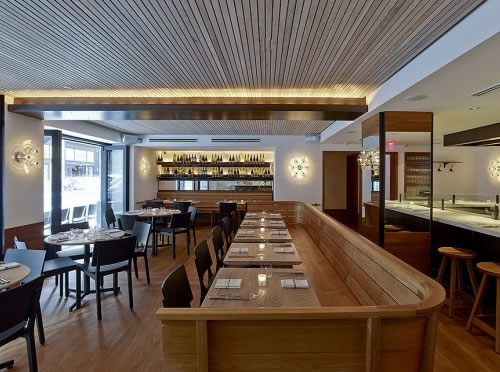 Restaurateur David Fields opened a .kitchen about a year ago, teaming up with one of Philly's favorite chefs, Bryan Sikora. Fields, who is no stranger to opening restaurants, was the brains behind the highly-acclaimed Salt, which gave Philly it's first taste of the modernist movement, and produced some of our most famous local cooks working today. Eater chatted up Fields about teaming up with Sikora, creating one of Philly's most dynamic wine lists, and fighting the stagnant image of a hotel restaurant.

a. kitchen isn't your first rodeo. Can you talk about your restaurant experience before opening this place? I opened Salt restaurant on the corner of Rittenhouse and 20th Street in 2002, with chef Vernon Morales. We closed up shop at the end of 2004. The past few years, I have been working with the Korman Real Estate, who came to me about opening a restaurant in the aka hotel here in Philly. In September of 2010, we first got the ideas together, and then opened up in June of 2011.

How did you end up partnering with Bryan Sikora? I've always like Bryan's food, I've known him since his days back at Django, which was his first restaurant, right off of South Street. In fact, back then, I was the restaurant critic for Philadelphia Magazine, and gave him 3 stars. That was in 2000, if I remember correctly. Then he left to do Talula's Table, and it became a huge hit, and nationally recognized. We stayed in touch, and over the years talked about doing a project. And then we finally got the opportunity to work together.

The look of the space is very modern and slick. A stunning restaurant. How much influence did you guys have over the look and design? Actually, I worked closely with the designers of the space, since the concept was mine. Of course, we're part of aka, but my relationship with Larry Korman allowed us to really make something unique, and not just a hotel restaurant. We always wanted a hotel restaurant that would stand on its own. Even with big name hotels, the restaurants often get a bad rap. So, it was important that the restaurant was standalone, with a compelling menu, and creative wine list. I got to work with Edward Asfour in New York, the architect who did the Blue Ribbon restaurants. We brought a.kitchen to life.

When Philly thinks of a.kitchen, it's easy to forget that it's part of the hotel, which is what you were trying to accomplish. Do you support the hotel with room service, though? We don't do the actual room service, but we do deliver to the rooms. And we open for breakfast at 7, which we definitely wouldn't do if we weren't part of the hotel. So, we definitely support the hotel. We just didn't want to be thought of that way.

The wine list of a. kitchen is pretty fantastic. Is that something you personally focused on? It is. I like Old World wine, with lower alcohol and higher acidity, which goes better with food. And, we like to go with small producer, small business, farmer-type wines. I like to make a wine list that I am interested in, and hope that spreads to the diners. It's really the whole idea of the restaurant, to break away from the hotel restaurant stigma. It helps make what we do distinctive. We're at around 275 bottles on the list now, and we focus on affordability. We don't do the usual markup you'll see around town, too.

What challenges did you find early on? We had opened places before, so we were prepared for the worst. Actually, our biggest problem has been the brunch crowds are a lot larger than we anticipated, we did 215 covers last week on Sunday on 50 seats. And, we need to get the machine a little more oiled and working smoother, if that's the volume we're going to be handling with three meals a day as a hotel restaurant.

What is the must-have dish right now? Hmmm, we have a few, but I'm really partial to the lamb loin, with farro risotto, fiddlehead ferns, and Taleggio. Our biggest seller is the chili-glazed swordfish with white beans and black olive puree, though.

You guys were part of the Cliff Lee story that after he went to Serafina and was basically ignored, he came across the street and ate at your restaurant. What happened? You know, I'm glad it worked out. But, we don't give that preferential treatment to athletes or anything. We do try to accommodate our locals, our regulars, and neighborhood people. But, we don't push the book. Neighborhood hospitality is more about offering free drinks, and recognizing regulars on your block and taking care of them.

So what's the future of a. kitchen? We're not looking to expand yet, and we just need to make the machine that is a. kitchen run more smoothly. Change up dishes, get service perfect, and consistency. We have had a very successful first year, and we're lucky. So, we have the chance to work on little things to make them better. If there's an opportunity in the future at other aka places, I am sure we will talk about it, but right now, that's not the plan.