Share All sharing options for: Norm MacDonald Plays Quizzo at The Bards 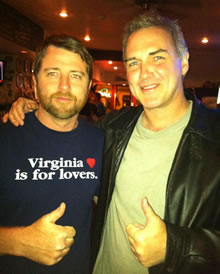 While the rest of Philly was distracted with Beer Week happenings, comedian Norm MacDonald showed up at The Bards to play Quizzo with Johnny Goodtimes, Philly's only true man of leisure. And, MacDonald wasn't there to look pretty, either. He came in tied for second place.

"He was here for a comedy show at Helium, and came over after his set," said Goodtimes. "After they tied for second, he played Rock, Paper, Scissors to decide a winner. He lost."

We asked what clever team name MacDonald came up with, and Goodtimes said he went with "Corner Bar," which isn't funny. But, a competing team went with "Dirty Work is My Favorite Movie," which MacDonald made in 1998. MacDonald is in town at Helium until Sunday.