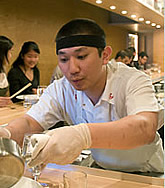 Restauratuer Stephen Starr has recently been spotted out and about with chef Peter Serpico, formerly David Chang's right-hand man in the Momofuku empire. Before we knew that the Frankford Avenue project was Fette Sau, Eater asked if Serpico was involved with it, to which Starr said, "Peter Serpico is not involved with that project." Considering Starr mentioned he was interested in doing a noodle house in our Q&A from January, could this be the start of that project? Stay tuned. [EaterWire]