Alicia Santucci on Year One at Santucci's

Share All sharing options for: Alicia Santucci on Year One at Santucci's 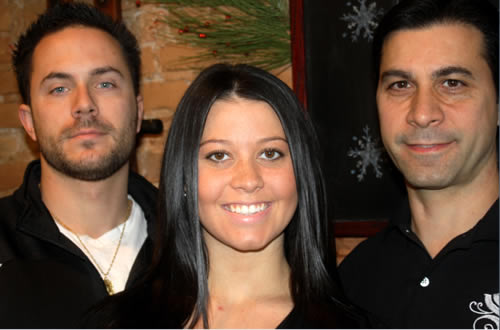 Alicia Santucci, with father Frank (right), and Blake Barabuscio (left) [Photo: Santucci's]
Alicia Santucci brought Northeast Philly's favorite pizza, Santucci's, to the Italian Market last year. Even though the neighborhood has a pizza parlor on almost every corner, Santucci's was a huge hit the first minute the doors swung open. Alicia, along with her father Frank and husband-to-be Blake Barabuscio, have created a destination restaurant that boasts a fantastic Italian menu along with their legendary square pies, and a weekend brunch that's getting a lot of buzz. Eater chatted up the lovely Alicia about the family business, expansion plans, and a new generation of Santucci's fans.

Every Santucci's is somewhere in Northeast Philly. Why did you decide to come to South Philly?
Well, my grandparents lived here in South Philly, and I wanted to come back to where the business started. Blake and I were just sitting at the kitchen table, and I said I wanted to open a restaurant. His eyes lit up, as he's always been an entrepreneur, and my dad, well, he's been in the restaurant business his whole life, and owned his own shop. So it wasn't a hard sell with the family. And I said I wanted to open the store near where my grandparents were.

Opening a shop in the Northeast would have been easier because of your family name, right? Did you find a lot of Santucci's fans down here?
Funny enough, so many of the families that grew up in the Northeast ended up down here. They moved, or the kids moved and started families down here, so we saw just as many people that grew up on our pizza were already down here. It was a nice surprise. At first, we thought about not even naming the restaurant Santucci's, because we felt it wouldn't help where we were moving to. But, our family name is important to me, so we stuck with it. I'm glad we did.

Your Santucci's is different than the others with the extensive menu outside of the pizza. Was that always the plan?
For Blake and me, yes it was. We eat out a lot, and wanted to build a restaurant that was out of our comfort zone. My father, he's old school, and it took some convincing, but he got on board. And, it turned out pretty well, so, that was the right choice, too. Our chef, Bobby Saritsoglou, is very talented, and is now a part of our family. He has some fans who eat all three meals here.

The restaurant took awhile to open. What challenges did you face?
Well, everyone knows it's not easy to open a restaurant in the city of Philadelphia. But, we weren't in a rush, and made sure it was all done the right way. It was nice to come down and see the progress over time. Physically seeing your dream become a reality is amazing.

Were you scouting locations for awhile? Or did the opportunity present itself, and you jumped on it?
Well, my biggest accomplishment was finding the space. Blake will say he did it, but that was my big contribution (laughing). This place became available, and it was near where my grandparents lived, and I said this was where we needed to open the shop. So, we were going to lease it, but my dad insisted we buy the bricks. After some negotiations, we go it done, and we own the property.

The recipes in your family are handed down through generations. Why bring in an outside chef?
There's a lot of pride in our family when it comes to cooking, and everyone has talent. But, to do what we wanted to do, we needed someone who worked professionally in a kitchen, and had a specific skillset. Bobby trained in Europe and spent a lot of time working in Philly, and he was just the perfect fit. We hired him a year before we opened, and to keep him with us, he worked at my father's restaurant and was teaching chefs there, preparing for the opening of Santuccis.

What are the must-haves on the menu?
Of course our pizza. There probably hasn't been one order that didn't include our square pizza, but Bobby's daily specials have a big fan base. Each day they're different, so if you miss out, you miss out. But, we have people who eat here almost every day.

Business has been pretty brisk since you've opened. Has that slowed down at all?
No, originally we planned to do a soft opening and get our feet under us, but that didn't happen at all. We were busy from the first day, and it hasn't slowed down a bit. I am so thankful that the neighborhood is supporting us. But, we were surprised with how fast word of mouth started spreading, and the local writers and critics have given us so much support. It's been unreal.

Did that crush cause any setbacks or add challenges?
It did. Since most of our staff is family members, the training aspect of the business has been a challenge. We just haven't had the time to do intense training, especially with the family members who are just learning the business. But, they all try really hard, and give us so much of their time.

What was the biggest surprise of the first year?
Honestly, it's the people who eat a lot of meals with us, or even family dinner with us. In our family, and I'm sure with other neighborhood families, family dinner is a big deal. And to have them spend it with us is a big compliment. To have these people say they feel like they're dining with us in our home is the best possible praise.

So, what's the future hold for Santucci's?
We just opened our brand new outdoor patio space. That's very exciting. And, we have plans to expand, but I recently had a baby, and the wedding is coming. So, after we get that sorted out, we will discuss the next steps. But, we have looked at some locations, and are working on it. I just am so thankful for my staff and the neighborhood for making our restaurant a success. It's really humbling, and I've loved every minute of it.