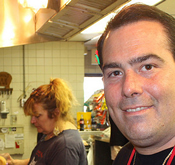 John Bucci, Jr. is returning to John's Roast Pork full-time after taking a four-year sabbatical to battle leukemia. The Insider is reporting that John's had some more big news, too, as they were a wild card selection in the Best Sandwich in America contest being held on the Travel Channel. Adam Richman and Co. had always planned on adding them to the contest, but were keeping it a secret. Now, Philly has two bites in the finals, as DiNic's roast pork is joining John's cheesesteak on August 15 at 9 p.m., where the winner will be crowned. [The Insider]