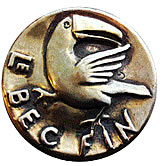 If you needed more proof that Le Bec Fin has joined the modern Philly restaurant revolution, they recently launched a Twitter account. Since the sale of LBF, they've changed ownership, executive chef, overhauled the space, dropped the hyphen in their name, and are now in the social media game. There's no doubt, though, that if someone taught Georges Perrier how to use Twitter, he would have been the greatest tweeting chef the world has ever seen. [Twitter]