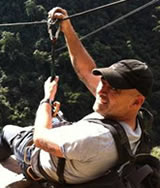 Todd Carmichael's new coffee-hunting show, now called Dangerous Grounds, premieres on November 5 on the Travel Channel at 10 p.m. After the big premiere, the show will start in its regular time slot, on Tuesday, November 13. According to a press release, Carmichael has to at various points in the series create makeshift zip lines, "dodge machine gun-toting adversaries," and sleep under vehicles to avoid being killed. Sweet. [~EN~]