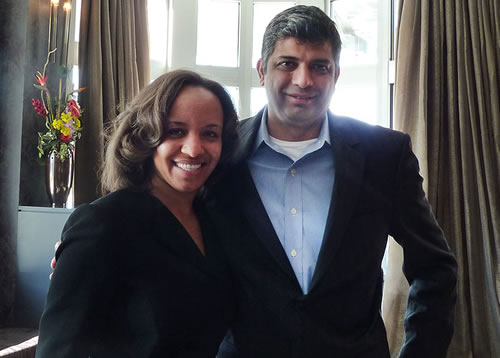 Munish Narula (right) at Tashan [Photo: Tashan]
Munish Narula has a local Indian restaurant empire that started with Tiffin many years ago on Girard Avenue, and added a crown jewel last year with the opening of the massive Tashan.

The super slick high-end restaurant opened at a challenging location with a challenging cuisine, and Narula has certainly made it work. Eater sat down with Narula to chat about the highs and lows of the first year in business on Broad Street, and his plan for restaurant world domination.

When did you decide you wanted to open up a high-end Indian restaurant in Philly?
We talked about it probably two years before we opened the doors, and have been working on the idea for awhile. I knew I always wanted to do this concept, but when was the most challenging aspect. Indian food has gotten more mainstream every year, and before you can do a restaurant of this scale, you need to know that the popularity is there to support it.

Did the developer approach you or did you approach them about opening at 777 S. Broad?
I knew Carl Danoff long before, and we had talked about opening another Tiffin there, but the space wasn't right for a Tiffin. It's too big, and just too expensive to open a Tiffin, so the idea just went away. But then he called up and asked if we would be interested in doing the high-end concept there, and it seemed like a good fit. So, we got started.

How long did it take you to open, and what challenges did you face during the development process?
It took 4 or 5 months just to get the lease locked down, and doing the hearing with the Zoning Board, and neighborhood associations added more time. Also, the developer we used was from New York and we had to wait for them to be ready, too.

As for challenges, only after we had the design done and everything completed, did we find out that we needed more bathrooms in the restaurant, which put everything to a stop. More bathrooms also meant more storage space, so we had to revisit all of that before we started construction, and that was a huge setback. I still to this day don't understand that, but it's OK, we got it done.

Did executive chef Sylva Senat inspire the menu, did you have an idea already?
For the longest time we just thought we would have a very experienced Indian chef run the kitchen. So, I went to D.C. for a lot of visits to restaurants, and even flew to London, where Indian food is quite popular and they have some of the best Indian chefs in the world. Then, one night when I was at dinner with my Director of Operations, he asked why we needed to have an Indian chef, and he was right.

So, we expanded the search, and Sylva ended up being the right fit. He had never cooked Indian food before, and said his only experience was eating it a few times (laughs). But, I knew what I wanted, and he was the right guy. I'm proud of our menu. It took almost a year to develop.

The kitchen is one of the most amazing and dramatic in Philly. How much of an undertaking was designing it, and how much did it cost?
We have some pieces of equipment no one else does, and it was pretty much my biggest contribution. I spent most of my time working with the kitchen designers. We had our tandoors designed specifically for us in the UK. I think we spent around $250,000 on it in total.

Bindi was the only other real higher end Indian restaurant in Philly. Did the closing of it affect your plans at all in a good or bad way?
I was sad to see Bindi close, as Marcie is a really talented chef, and Bindi was good. I liked eating there, and miss it. I feel like Bindi closing was only a bad thing for Tashan, and for Philly. Nothing good came from that, and being the only game in town didn't change our success.

What were the biggest positive surprises in your first year? And what were the worst?
The menu has been received well, and that was certainly a happy situation for us. I mean, we were happy with the product before we opened, but you never know how a public that has preconceived ideas will respond. The biggest challenge was figuring out service. We didn't have a template to follow, and it was a big undertaking, so that was an uphill climb.

The critical response has been great. Were you surprised by the positive response in the press?
Well, if we were surprised, that means we weren't confident in what we were doing, so, no. I mean, you hope for the best, but I'm happy to see that those people enjoyed the restaurant. When Craig LaBan gave us three bells it really helped with business almost right away, which was amazing. And when we got named on the semi-finalist list of Best New Restaurant for a Beard Award, there was no after effect, which we were surprised by. We figured there would be an uptick for sure.

What's next for Tashan?
Well, our next big plan is to be more active on social media, and to bring some classic Indian dishes to the menu. We have some wonderful regulars who have mentioned they wanted to see our versions of some of the classics, and it's a challenge that we welcome. Also, we've become a stop for a lot of world travelers who are fans of Indian cuisine, and a few have pitched me ideas for expanding the restaurant into foreign markets. At first, it seemed implausible, but don't be surprised if we decide to go across the pond in the future.