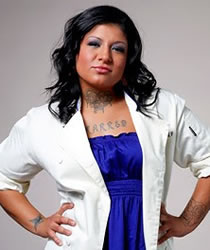 Former Top Chef competitor Jen Zavala has landed at the Farmer's Cabinet, fresh off her tenure in the kitchen of the Interstate Draft House. Zavala isn't taking over as executive chef, but is said to be collaborating with current top dog Chris Allen. The press release coming out of F-Cab added that "calls regarding her involvement would not be taken" at the restaurant, which is cryptic enough to warrant some speculation.

Is she partnering with the ownership on her new Cherry Bomb Bus endeavor? Are Zavala and Allen going to be featured in a pay-per-view fight to the death using butcher knives for control of the kitchen? We really need to know.

If you're really interested in finding out the truth, you can ask her yourself tonight at Prohibition Taproom during the girl-powered industry party, Hen's Revenge. Hosted by Zavala and Cherry Bomb cohort Christina Clark, Hen's Revenge is a showcase of the fairer sex in the rough and tumble world of the professional kitchen.