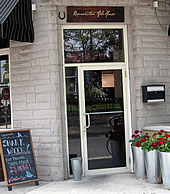 Joey Chmiko is leaving the kitchen of Resurrection Ale House and is headed for NYC. What that means though, is that former sous chef Rhett Vellner has been promoted to take over Chimko's role, and will be updating the menu, too. All Philly asks, though, is that the fried chicken stays on the menu no matter what. Owners Brendan Hartranft and Leigh Maida have also recently named an executive chef for their West Philly spot, Local 44, where Justin Bennett is now running the show. [Foobooz]