Most Useful Philly iPhone Restaurant App of All Time

Share All sharing options for: Most Useful Philly iPhone Restaurant App of All Time 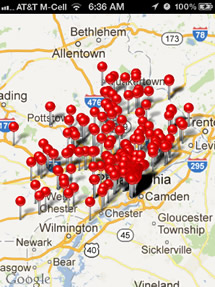 Eli Gratz, owner of Great Time Apps in Chicago, has created an iPhone and iPad app that keeps tabs on all of the BYOBs in a metropolitan area. The first version was released in his hometown, but our huge network of BYOBs made Philly an easy pick for expansion.

"In Chicago, there's nothing really like this, and BYOBs have a very intense following," Gratz told Eater. "In Philly, I imagine it's that many times bigger because of how influential and vital they are to your restaurant scene."

The app, which launches on Thursday in the iTunes Store (link not active yet), finds BYOBs close to you by location and by cuisine. The BYOB App will retail at $1.99 for the first 10,000 downloads, and $3.99 thereafter. You know you're going to download it sooner or later, so early adoption will save you a few bucks. Currently, the app lists 550 BYOBs in our area, and Gratz said his team will be constantly updating the database as restaurants open. Gratz added that depending upon the success of the app in Philly, they'll develop a version for Android, as well.

We'll be picking ten of our newsletter subscribers at random to receive a free code for a fully-functional version of the new app, so if you haven't done so yet, get on it. Good luck!