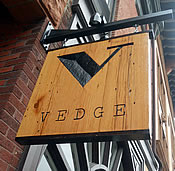 Vedge was named one of the Top 10 Upscale Vegan Restaurants in America by Shape Magazine. This award joins the gaggle of others that have been heaped upon Rich Landau and Kate Jacoby's plant-based restaurant, which has been on fire since the day they opened the doors. Shape highlights the deep 100-bottle wine list that is normally an afterthought in veggie-forward restaurants. No word yet on Landau's possible appearance on Iron Chef, but it's probably not too far off. [Shape Magazine]