Share All sharing options for: Katie Loeb is a Champion; Le Bec Fin Opening a Bakery 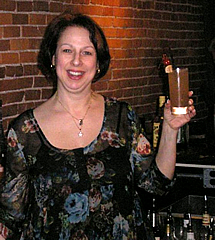 UNIVERSITY CITY — Friend of Eater and master mixologist, Katie Loeb, took home first prize in the Bärenjäger Cocktail Competition in New York last weekend. She was selected in a national search and then whooped on some of that ass to be crowned the champ, taking home a cool grand and a trip to Oktoberfest in Germany. Way to make us proud. [Meal Ticket]

SOMEWHERE — There's a new project coming from Le Bec Fin called Le Bec Ery and it's going to be a, wait for it, bakery.. No idea where it's going to be, but there will be baked goods. Former Le Bec-Fin owner/superchef Georges Perrier also went the bakery route, so maybe there's something in the water at 1523 Walnut Street. [Foobooz]

GRAY'S FERRY — There are more than a few changes happening at Resurrection Ale House. They're celebrating three years in business on September 26 with a big bash, welcoming in their new executive chef Rhett Vellner, and dumping their huge bottle list so they can focus on upping the ante of their quick-changing draft list for the adventurous drinker. [Meal Ticket]

Filipino Food Truck Tabachoy Is Getting Its First Brick-and-Mortar

Here Are Your Food and Drink Options at Lincoln Financial Field, Home of the Eagles