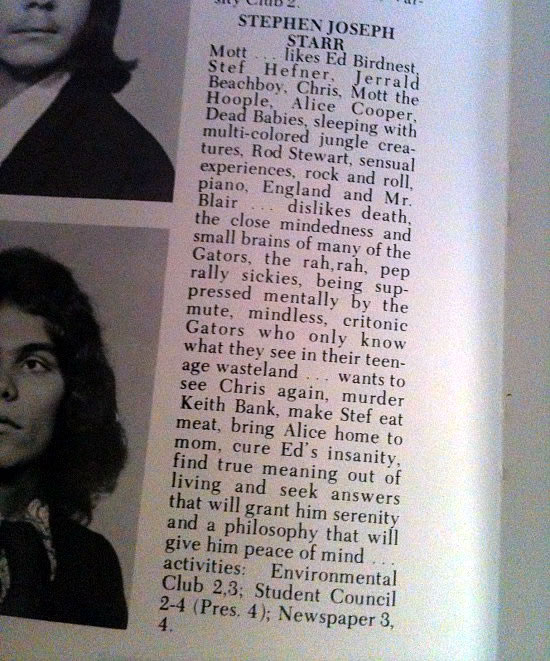 You may remember the amazing yearbook picture of Philly restaurateur overlord Stephen Starr from last month, but here's something that's a million times better. Philebrity unearthed that entire page of Starr's yearbook, which includes some amazing quotes and tidbits of his life as a young South Jersey resident (click on the image to check out a full-size version).

Starr might have been nicknamed "Mott." Some of his interests include "Alice Cooper, Dead Babies, Rod Stewart, sleeping with multi-colored jungle animals, England, and sensual experiences." Stuff that harshed Starr's mellow are listed here as "closed-mindedness and small brains of many Gators; rah-rah pep rally sickies; being suppressed mentally by the mute, mindless, critonic Gators who only know what they see in their teenage wasteland; death."

Other revelations listed on his yearbook page include his Student Council Presidency (not surprising), and that he was a member of Environmental Club and wrote for the school paper. This proves once and for all that Starr is most definitely one of us.