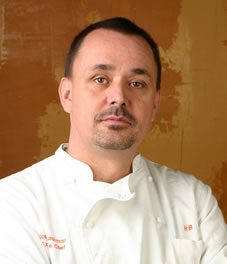 Chicago chef Joncarl Lachman is returning to his hometown of Philadelphia this year to open a new restaurant. When news first broke he was calling it Winkel, but now it's Noord, and the concept has changed a little bit. Instead of focusing on Dutch food, he's opening it up to Northern European, more specifically the Alsace region.

"Look for beets, vinegar, a lot of smoked fish and rotisserie. We're getting a smoker. On the menu we'll have three different boards, featuring bites and salads like bluefish rillettes or smoked shrimp and egg salad on brown bread. I loved eating in Copenhagen, and will definitely feature what they call smørrebrød."

The kitchen will be open, which is a first for Lachman, but he's into chatting up guests and being friendly, known as gezelligheid in Dutch. The restaurant is shooting for an April opening, and Lachman will be living above Noord, so he'll always be close to the action. But, he modeled his successful restaurant in Chicago, Home Bistro, after the BYOBs in Philly, so count on this one fitting in just fine.