Share All sharing options for: Lifers: Paul Rodriguez of Fork

Cocktail Week rolls on with our latest feature: Lifers. Today, each site across the Eater Universe is featuring a Q & A with cocktail "lifers." Those bartenders and beverage managers who have spent the bulk of their career in the industry behind the stick, keeping you warm and fuzzy with booze. 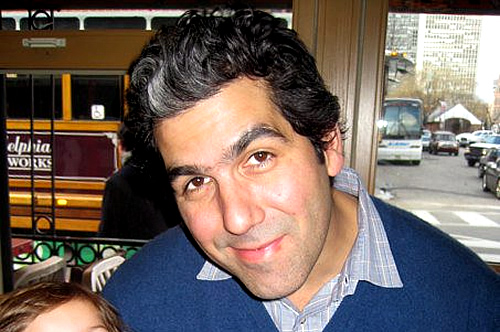 Paul Rodriguez has seen it all in the cocktail world. [Photo: Facebook]
If you've ever drunken a glass of wine or thrown back a cocktail at Tinto, there's a damn good chance that Paul Rodriguez made it so. Having started his career behind the bar at Fork in 2001, Paul has returned home to Market Street to help Ellen Yin and Eli Kulp keep Fork on top of the heap in a very competitive industry. We asked Paul how things were when he first started making drinks so many moons ago, how Philly has changed right before his eyes, and where we're headed in the future.

When did you start bartending in Philly?
It was about 12 or 13 years ago. I was in grad school and a few of my friends were working at Fork, so I decided to get a job here, too.

Fork has always been an industry leader, so were they already doing signature cocktails when you started? Was that your doing or did (owner) Ellen (Yin) get the ball rolling?
Well, you know that Ellen is always up on trends in the industry and what's happening in the restaurant scene. She has been dedicated to keeping Fork contemporary and progressive since day one, so she absolutely influenced a lot of that. And in the context of the cuisine we were serving, the beverage program had to keep up, too. We were always pouring great liquor, we always had fresh juices and mixers, and we focused on doing great classics or riffs on classics. But the language wasn't even cose to what it is today.

So what was the language and the scene like in 2001 from a customers perspective?
It was really basic at that time. Everyone wanted something basic, which isn't a bad thing, mind you. Creativity wasn't anywhere close to what it is today, though. You had the juice classics, like mojitos and cosmos, but no one was doing any of the complicated "mixology" that we see today. We were only just starting to accept the idea of a $16 grapefruit juice martini.

Which restaurant or bar was the first to really jump on that modern cocktail bandwagon?
I'd say it was The Striped Bass back when Neil Stein owned it, well at least in terms of getting great product for your drinks, which makes all of the difference. That was a major point of discussion, and it was always the price. Like you would hear "Oh my God, they're charging $15 for a vodka martini." Personally, I learned from some old timers who were more on the classic side of things, and taught me that way. Like, a Manhattan always has angostura bitters and you always make a martini with vermouth.

Do you think that since we've gotten away from simpler drinks that there's too much going on and we're losing flavors with the cocktails that have 20 ingredients?
I don't think so, myself. I mean we're doing drinks with 6 and 8 ingredients here, and it's actually really, really hard to do right. Guys like Al Sotack and Colin Shearn at The Franklin had been doing it for a long time and make it look easy but it's not. But, I think, personally in terms of taste, that a three ingredient Manhattan done right is still one of the most amazing things you will ever taste.

I agree. I think it's harder to make those simple drinks right because it's all about balance and you can't hide mistakes under 10 ingredients.
That's absolutely true. It's the same with many facets of alcohol served in restaurants, like making a wine list. If you only have 20 wine selections, you need to know what you're doing and do it right, as opposed to having a catalog of wine with verticals of Latour at your disposal.

You said that Striped Bass was the first to jump on the expensive liquor product bandwagon. So who do you think was doing the specialty cocktails the best and first here in town?
When I was at Amada it was Katie Loeb, who really knocked the drink list out of the park, and she's still a big influence today. But, if I had to pick, I would say it's Southwark. They had so many amazing liquor selections, and in turn also made some really creative drinks and developed that idea of a cocktail menu, which wasn't common at that time. Oh, and the rye. You can thank them for getting everyone on board with rye Manhattans, and getting us away from the crazy stuff that was happening at places like The Continental. But again, they were big on product, too. Introducing us to these fantastically well-made liquors that separate good drinks from great drinks. You can always make a great drink with great product.

Staying with the idea of great product, do you think that having a huge selection of top-shelf well liquor is going to be the standard, like they pioneered Hop Sing Laundromat?
Of for sure. You can't go backwards, and he is doing amazing stuff over there. He's such a passionate guy and he lives up to all of the standards that he sets, and it starts with great liquor. He stayed committed to his vision, and he executed it perfectly. And he's not even charging that much money. I stayed in contact with him throughout the process of opening the bar. And when it opened, I was so amazed, and frankly a bit jealous at what he had accomplished there.

Besides the places you've already name-dropped, which bars do you think are doing the best work right now, or who is underrated and not getting the love they deserve?
Funny enough, now that I'm married and have a family, I don't get out as much. But working right on 20th Street, I was really lucky to be surrounded by underappreciated bars. Believe it or not, the space and quality at 1 Tippling Place is the real deal. Everyone I know in the industry loves that place. I think the Ranstead doesn't get the love it deserves. Phoebe and Christian are really happy at Emmanuelle and you can tell by the quality and creativity of the drinks there. I think they've finally hit their stride after many years of perfecting what they do. Oh, and David Fields at a. bar. That place is definitely in the top 3. Amazing space, it's so beautiful, and David is dedicated to having a great bar with great drinks.

So, what's next for cocktails, or what's the hot trend right now that's about to blow up?
Right now, we're starting to see the cocktail version of molecular gastronomy become popular. It's stuff we read about happening in Europe for awhile that's now hitting our shores. Lots of infusions, jellies, cold smoking, and complex techniques like that. Oh, and the other thing that's quickly getting huge is the massive number of American craft spirits that are popping up. Like craft beer a few years ago, you're seeing so many new brands of small batch craft liquor made right here in the U.S. In many cases it's better than the big brands that have been staples for so long, which I think is fantastic. But, it's all good stuff, and we've only just started to scratch the surface of what we can accomplish in the world of cocktails.