Share All sharing options for: George Sabatino to Open Aldine in Rittenhouse 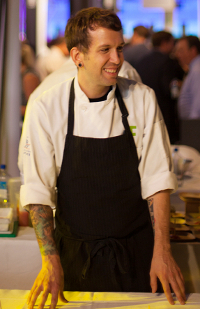 Chef George Sabatino, itinerant since he left Stateside in March, is getting close to settling down into his own place, reports Michael Klein today. He's been involved in just about every new or seasonal spot Avram Hornik's been able to dream up over the past year, so it comes as no surprise that Hornik is involved in the new deal, which will bring Sabatino to Rittenhouse Square.

The new restaurant will be called Aldine (named for some bygone neighborhood landmarks), and will replace the Hornik-owned lounge Noche, on the second floor at 1901 Chestnut St. Klein reports that there will be a full bar and that Sabatino is promising a "value-driven and chef-driven" menu. They hope to open in the spring after a full renovation of Noche, which will close after New Year's Eve.
[Photo: Yoni Nimrod/Audrey Claire Cook]
· Chef George Sabatino Opening Restaurant in Rittenhouse [Insider]
· All George Sabatino Coverage [-EPHI-]

Celebrate Fall in Philly With These Spiced Vegan Treats