Where to Celebrate New Year's Eve in Philly

Share All sharing options for: Where to Celebrate New Year's Eve in Philly 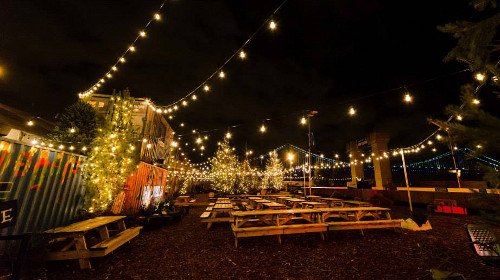 If you're looking to go out on New Year's Eve, you won't want for options. Pretty much every bar, restaurant, hotel, or big open space where a tent could plausibly be set up gets in on the game, and it can be a little overwhelming. So in lieu of a comprehensive list, here is a hand-picked list of Philly's best bets for New Year's Eve 2014, with options to cover a wide range of celebration styles.

· The Fireworks Option If you want to take in the waterfront fireworks, your best party option is at the Lodge at Waterfront Winterfest. $85 gets you an open bar, passed hors d'oeuvres by George Sabatino (on the menu: smoked turkey lettuce cups, potato fritters, pigs in a blanket, pork sausage skewers, golden beet tartare, mini sweet potato pocket pies, and spice-roasted peanuts), a champagne toast, and of course, a prime viewing spot for the show.

· The Hotel Option If you want to go schmancy, we like the idea of NYE at Stratus, the rooftop lounge at the Hotel Monaco. Tickets are $150 and include an open bar, champagne toast, passed hors d'oeuvres, and "party favors." They probably just mean noisemakers and silly glasses, though.

· The Low-Key Option The crew at Cheu Noodle Bar tried to run a special NYE multi-seating prix fixe featuring courses like "Encapsulated Oyster," but they quickly found out that their regulars just wanted the chance to make reservations for the noodles they already know and love. So now, Cheu will run their normal menu on NYE, but make things festive with some good drink specials and free sparkling sake all night long. They'll take walk-ins as space permits, but this is your one chance to make a reservation at the casual spot, so why take the chance?

· The Karaoke Option There has to be a karaoke option, and Yakitori Boy is making it pretty easy on you. Prices range from $55 for a few hours of open bar and karaoke, to $90 a head for all-night private rooms; some food is included from 9 to 10:30 p.m. Tickets here.

· The Grown-Up Option Much of what NYE is about is either college-bar rowdiness or pricy soirees in hotel ballrooms, but staying home in your jammies is not the only way around that. Jerry's Bar feels like just the right mix of relaxed and civilized, and they've got a pretty nice thing going for NYE. No tickets, no covers, but there will be a champagne toast and some hors d'oeuvres and a giant ball dropping. (You might want to make a reservation if you plan to have dinner there first, though.)

· The Cozy Dinner Option(s) There are a ton of restaurants serving up great meals on NYE, but it's getting a little late to secure tables at some, unless you're OK with eating very early. Here are two of our top picks that still have prime tables available (at least as of hitting publish on this post). 1. Fitler Dining Room is doing two seatings, offering either a five-course menu for $85 per person, or a seven-course menu for $120. 2. Russet has seatings throughout the night for a five-course meal at $75 per person that includes oysters, house-cured boar belly, hand-rolled pasta and more. (FYI: Russet is BYOB.)

· The No-Frills Option An open bar may be sort of integral to a decent NYE, but no need to go crazy. The Boot & Saddle is asking just $50 for their celebration, which includes live music, a champagne toast, antipasti buffet, and unlimited well drinks, Yuengling, and 'Gansett.

· The Morning-After Option On New Year's Day, Supper will host their Hair of the Dog brunch to help you through your hangover and benefit the ASPCA. You can bring your dog along (they'll even have complimentary house-made biscuits on hand), and eat bacon babka. They have a lot of other things on their menu, too, but... bacon babka. (They're also doing an NYE prix fixe - menu is here; maybe next year they should offer an upcharge to allow patrons attending both to crash on their floor in between.)