Share All sharing options for: Restaurant Experts Name Their Best Meal of 2013

As is the tradition at Eater, our closeout of the year is a survey of friends, industry types, and bloggers. We already covered this year's restaurant standbys and top newcomers, tried to sum up the whole year in dining in one word, named the year's hottest dining neighborhood, and remembered 2013's most surprising moments in food. Now, we're talking about the best meals we ate all year. Responses are related in no particular order. Readers, please add your own survey answers in the comments. 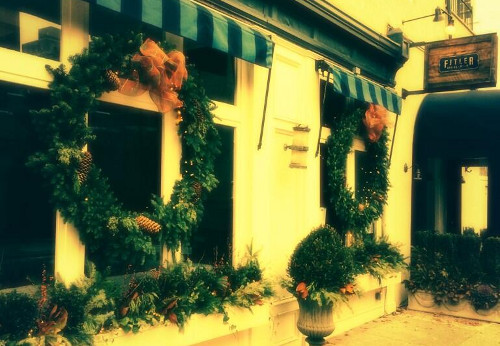 Fitler Dining Room was the site of some of the year's most perfect meals. [Photo: FDR/Twitter]

Fitler Dining Room recently held a dinner featuring the ciders of Frecon Farms where every single thing was perfect. Pacing? Perfect. Service? Perfect. Rob Marzinsky's food itself? A warm fruits de mer with a garnish of frozen lime puree was so good I'll never order one of those silly cold seafood platters again, because I know I'll be disappointed. And a plate of pork done five ways was NOT described as "pork five ways"! In addition to that, which made it a great dish to begin with, each of the preparations was spot on, and each tasted different event though they were all from one little heritage piglet. The cider? I'm usually a beer (or cocktails, or after that, wine) girl, but these glasses of apple-y booze turned my head with their nuance and flavors and (not least) the ability to get you buzzed! Even the coffee was fantastic. Go to this restaurant, you won't be disappointed.

The other week, when a few friends and I ordered everything on the menu at Little Fish. Chadd Jenkins cooks the best seafood in Philly, but he's also just one of the best chefs around period.

Sitting at the chef's table at Vernick, eating stuff on toast.

In March, I was writing about Christopher Hirshheimer and Melissa Hamilton of The Canal House, and I interviewed them over lunch at their Lambertville NJ studio, where they make their incredible books. They made salad, the most amazing lamb chops, a fruit crisp, and prosecco. There was even a cheese course. Those women are my culinary/publishing heroes.

Hot chicken and oyster po'boy at the counter at The Fat Ham.

Chicken Fricassee at El Varadero, a Cuban Restaurant on Isla Mujeres in Mexico.

Kevin McKenzie of Amusing My Bouche:

For me, the awesome absurdity of the Jason Cichonski and Scott Schroeder collaboration/man-lovefest Whiskey and Waffles Brunch at Ela was a highlight, but I have to say my first meal at Nick Elmi's Laurel. Seeing him cook his own food without constraint of George Perrier or the mighty Restaurant Associates was refreshing and hopefully a glance into more great things to come.

I had an unbelievable meal at Fork this year. We went for our one-year wedding anniversary and it was perfect, from the oysters and Champagne to the grapefruit/jasmine soup.

Pop-up dinner with Justin Bogle and Chris Kearse at Will.

I've got to go with the New York strip tasting at Barclay Prime. Side by side dry aged steak tasting? Incredible.

Fitler Dining Room. The food and the service kept one-upping each other throughout the whole meal.