Details on Zahav at Momofuku Have Emerged

Share All sharing options for: Details on Zahav at Momofuku Have Emerged 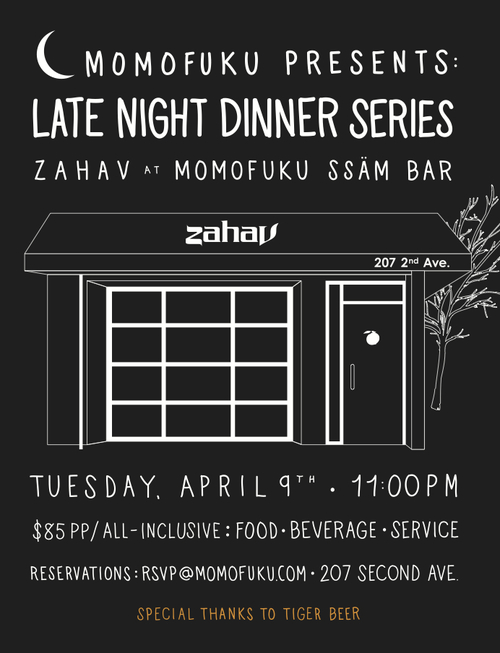 The Zahav team will be at Momofuku on April 9. [Photo: Momofuku/Tumblr]
So, it's official. Mike Solomonov and the Zahav crew are doing a late night dinner at Momofuku on April 9 at 11 p.m. It's $85 per person, which includes food, drinks, and service. This is the debut edition of a quarterly dinner series that's happening at Momofuku Ssäm Bar. So, how did Zahav end up in this prestigous position?

"The chef de cuisine of Ssäm Bar, Matt Rudofker, worked with me at Vetri when he was just a 17-year-old kid," Solomonov told Eater. "He set it all up, and we're honored and excited to be a part of the whole thing. We're going to really bust it out."

Solomonov said that David Chang & Co. requested an all-Zahav menu, so they're going all out with the "Mesibah" option that includes his legendary lamb shoulder (which is almost as famous as Solomonov himself). As for dessert, the Federal Donuts crew is whipping up a special fancy doughnut created specifically for the event, as well.

For many New Yorkers, this will be the first time they get to experience Solomonov in the flesh, who has become a bit of a New York Times darling—first there was an in-depth profile about his pursuit and passion for Israeli cuisine, then, a Pete Wells lovefest for Federal Donuts—and now he will take over NYC like he did Philadelphia.

Reservations are required for the event, and can be made for up to 6 people, so shoot your requests over to RSVP@momofuku.com to claim your spot at what is sure to be one of the dining experiences of the year.