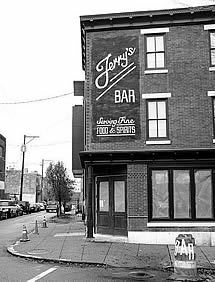 Longtime NoLibs staple Jerry's Bar has gone through an ownership change—Christie Proud and her husband Ryan Bernstein took over the place—and a major overhaul and they're cutting the ribbon on the new spot today. After two years of reno and demo, Jerry's joins a long line of popular old school joints that have been resurrected (Ortlieb's, The Dolphin, Trestle Inn) to join the 21st Century. Former Cafe Estelle frontman Marshall Green is running the kitchen, and has put together a very affordable menu full of pub staples like fried chicken wings, a specialty burger, and handcut fries.

The new interior features 12 taps, 100 seats, and a look that sports a marble bar top, subway tiles, and lots of repurposed woods and sconces. Don't forget that there are two floors, as well, which means plenty of places to lock down a regular table or barstool. So far, all of these update projects have gone over pretty well, and Jerry's looks like another big win for the revival scene here in Philly.