The upcoming restaurant/butcher/classroom from the owners of Bufad, Prohibition, and Cafe Lift is still a few weeks out.

Share All sharing options for: Kensington Quarters Gets New Signage From Some Dudes Clearly Untroubled by Heights

Inexplicably, there are people who can accomplish things other than panic attacks atop temporary scaffolding set-ups. And thanks to some of those people &#8212; in this case, the guys from True Hand Society &#8212; upcoming Kensington Quarters is showing public-facing signs of progress. 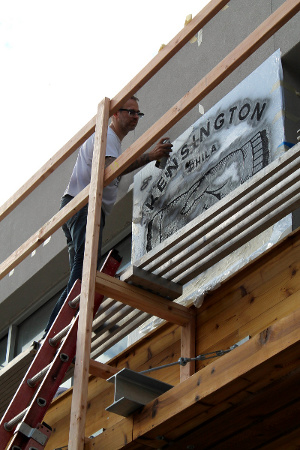 Kensington Quarters' opening is "still a few weeks out."

True Hand is a Fishtown tattoo and design shop that's previously worked on logos and signage for restaurateurs Jeniphur and Michael Pasquarello, owners of Cafe Lift, Prohibition Taproom, and Bufad.

For this latest project, the Pasquarellos have partnered with butcher Bryan Mayer to offer Fishtown a spot that will blend dining, retail, and education. The on-site butcher shop will operate six days a week, with the restaurant and bar serving dinner nightly. Eventually, a rotating schedule of classes, demos, and lectures will cover ground from cooking to butchering to sustainability. (Classes are not expected to start until the business has been up and running for a couple of months.)

Inside, True Hand's Mike Ski will also contribute a mural. Custom woodwork throughout comes from Ben McBrien of Kensington-based Farmhaus, whose cabinetry and furniture prominently features reclaimed wood. We haven't seen a menu yet, but exec Damon Menapace (who was the opening chef at Alla Spina) will lean heavily on local farms and distributors, including nearby Greensgrow.