Abe Fisher and Dizengoff were the twin stars of a twofer review from Philly Mag's Trey Popp this week. He devotes most of his space to the "brainier" of the two, Abe Fisher, and begins by getting to the heart of what is perhaps the restaurant's mission and its greatest challenge: confronting people's expectations of Jewish food. While an item like gefilte fish may not quite appeal to the masses, it also carries with it lots of a deeply rooted significance.

As such, some diners are dismissive of Abe's "revisionist gefilte fish," even though Popp declares it "a walk-off grand slam." However, co-owner Mike Solomonov told Popp, Abe's stuffed trout is actually quite authentic:

"The original gefilte fish was this whole, beautifully stuffed fish," Solomonov explains. "Not quenelles of shit in a jar of gelatinized carp bones that you only eat on holidays and cover it with horseradish so you can't taste what you're eating."

Popp loved most of other dishes too, from the thankfully unrecognizable take on kasha varnishkes, to the veal schnitzel tacos that turn out to be "the most surprising new tacos in town," to the much-lauded Montreal-style smoked shortrib. Only a few dishes fall short, and a similar success rate holds true at the bar, where most cocktails are sure things. Except for one:

Just beware the Bitter End, a mélange of Campari, Cynar and Cocchi Americano that reads like a dare and tastes like the reductio ad absurdum of the unofficial national contest to see who can concentrate the most bitterness in a single drink.

Comparatively little is said about Dizengoff, where Popp could find no flaws. "Veritable vegetable whisperer" Emily Seaman and the rest of the Dizengoff team are accomplishing no less than "changing the way [we] think about hummus," and Popp's affection is apparent.

Ultimately, the next-door neighbors scratch different itches &#8212; "while Abe Fisher's culinary revivalism has earned my admiration," he writes, "the hummusiya next door has won my heart" &#8212; but both share a solid three-star rating (out of four).

Meanwhile, City Paper's Adam Erace paid an early visit to Old City's Capofitto, the new pizzeria and bakery from the gelato wizards at Capogiro. And while chef-owner Stephanie Reitano tells Erace she took to Naples to learn the craft...

"I was cutting mozzarella for three hours a day," she remembers. "They’re very secretive, and it’s all men; they didn’t really like the idea of me going shoulder-to-shoulder on the line."

...she's dared to modify the recipe a bit, turning out Neapolitan-style pizzas from her lovely mosaic-covered custom oven. The not-quite-traditional pies fare well with Erace, who declares them "big enough to share, but good enough to hoard."

The rest of the savory menu suffers a bit from a lack of seasoning and a lack of variety &#8212; he wouldn't mind some more vegetables and pastas &#8212; but the overall impression is that there are highlights throughout and a lot of promise, given a bit of refining.

As for desserts, it sounds like things are already spot-on. Erace declares baker Brooke Saylor "a rising star," based on the strength of a pumpkin cheesecake with tart raspberry sauce, and some "stunning" apple dumplings.

Because this is a Capogiro joint, you can get anything a la mode.

Sounds like heaven. (And even applies to the brunch menu.) 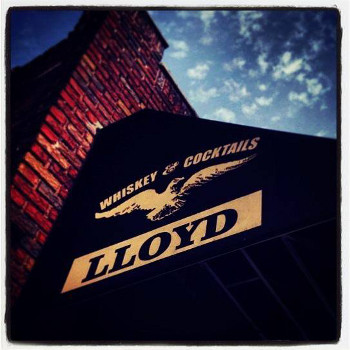 Philly Weekly's Brian Freedman finally made it up to Lloyd, the two-year-old whiskey bar in Fishtown, and fell head over heels for what sounds like an awfully meat-heavy meal. It begins with Buffalo fried duck skins, which turn out to be as good as they sound:

A generous portion of crackling rinds, each one shimmering in its traditional sauce and all of it accompanied by sweet matchsticks of apple, just may be the ultimate bar snack. Or anytime-of-day snack, for that matter.

Freedman chased that with a "blissful" charcuterie platter that he's sure could "convert even the most passionate vegetarian." Bloodlust not sated, Freedman moved on:

My burger alone would have been excellent, but the added layer of fried sweetbread on top took it to the umami stratosphere.

The review puts this forward as an example of the kitchen's "sly sense of humor." We're not sure we get the joke (explanations welcome), but it does sound awfully good.

One caveat: Freedman discloses that given his existing professional relationship with chef Val Stryjewski, his "anonymity was never an option" at Lloyd, but seems quite confident that this impacted his wholly faultless experience in any way.