The catch is, they're only available during Chanukah.

Share All sharing options for: At Long Last, Jelly Doughnuts From FedNuts

The fried-food visionaries at Federal Donuts have managed to make cake-doughnut believers out of even some of the most hardened yeast-raised zealots. Still, a cake-only doctrine tends to come with some sacrifices — chief among them, fillings. While the first FedNuts shop originally launched with filled varieties, what's past is past, and today's Fancies stick to toppings. When the mini-chain announced their Lynchian doughnut series earlier this year, we felt a fleeting moment of hope that they might debut a new jelly doughnut, but no such luck.

As it turns out, it looks like it was a combination of Chanukah tradition and the advent of mini doughnuts that's finally bringing jelly doughnuts to FedNuts — but they're only available during the holiday, and only by pre-order.

The Jewish festival of lights calls for foods cooked in oil, like latkes and sufganiyot — yeast-raised doughnuts typically filled with jelly. FedNuts' mini cake doughnuts have divots rather than holes, which conveniently provides a perfect vehicle for a dollop of jam on top: 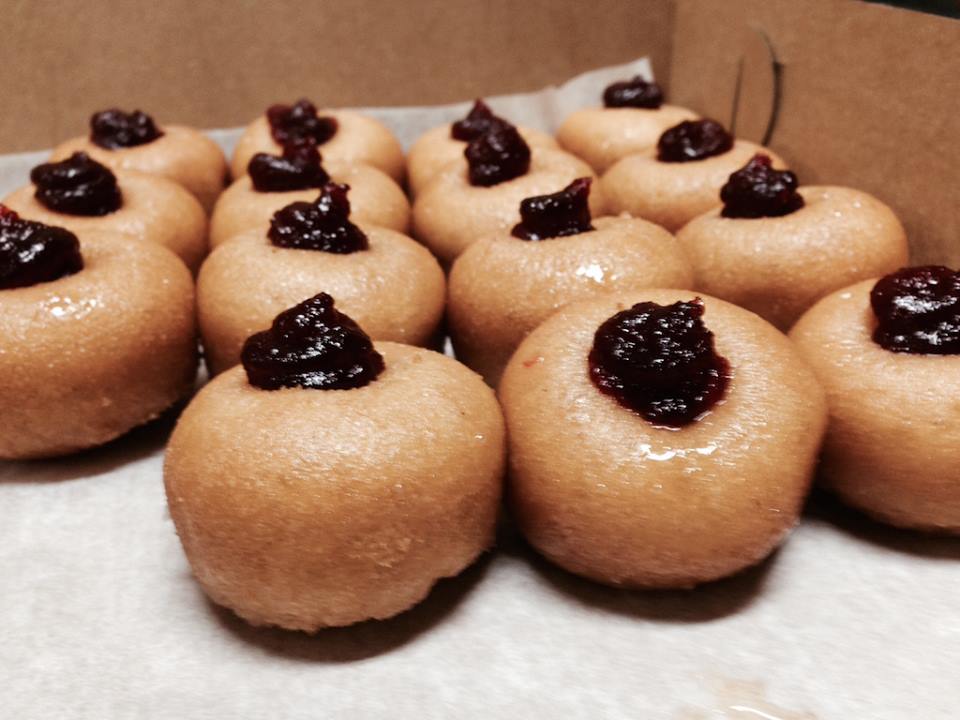 FedNuts' take on Chanukah doughnuts. (For more insight into their genesis, check out these earlier versions from the menu-testing phase.) [Photo: Federal Donuts]

Available beginning Tuesday, December 16, FedNuts Chanukah doughnuts are "an homage to sufganiyot" — honey-dipped mini FedNuts, each topped with raspberry jam. They're priced at $15 for 20 mini doughnuts, and are only available by pre-order. (They're taking orders now by email; pickup is available only from their Center City and North Philly stores. As usual, more advance notice can't hurt, but it looks like you can get next-day pickup as long as you order by 1 p.m.)

The limited-edition run of Chanukah doughnuts ends when the holiday does: Wednesday, December 24.