2014: The Year in Wood-Fired Appliances

Share All sharing options for: 2014: The Year in Wood-Fired Appliances

O what a year it's been for kitchen equipment fueled by tree parts, what a dream within a dream for those of us who thrill to crispy edges.

Pretty much everyone seems in agreement that 2014 was one of the best years for dining in Philly in recent memory, and with a slew of new restaurants came a number of promising trends — perhaps chief among them, a reverence for honest, rustic cooking over wood-fed flame.

Sure, this year was not the first time someone around here installed a wood-burning pizza oven, but it was certainly the year that we all fell deeply, madly in love with the idea of woodsmoke-tinged everything. And the equipment itself got flashy enough to warrant the spotlight: From imported pizza ovens handcrafted by Naples' top artisans to imposing custom grills and rotisseries, a lot of chefs treated themselves to some serious new toys this year.

Here now, a look back over the very hottest, most talked about pits of flame that took up residence in Philly kitchens and set our hearts aflutter in 2014.

Wood-fired fixtures really started having their moment in the build-up to the debut of this New American from brothers Jonathan and Justin Petruce and manager Tim Kweeder. The pre-opening hype centered on a mix of the talents of the chef-owners and the custom oven and grill that promised to be the centerpiece of the concept. As such, it felt especially fitting when Eater Philly readers named the trendsetter 2014's Restaurant of the Year.

It's hard to say who's enjoyed Petruce's kitchen equipment more, us or them. [Photo: Petruce/Facebook]

But hmm, were there any notable pizza ovens installed in 2014? Boy, were there ever. Capofitto chose to have their ultra-stylish model built on-site, but imported many of the materials, as well as the craftsmen who constructed it.

Other major openings contributing to Philly's wood-fired pizza boom chose to import their ovens, shipping over the work of some of the world's most famous Neapolitan artisans. In addition to a custom-built wood-burning grill in the kitchen, chef Joe Cicala opted for a Gianni Acunto oven in his newest East Passyunk project...

...while out in the suburbs, the owners of Pizzeria DiMeo installed a glitzy piece by Stefano Ferrara as the centerpiece of their new Wayne osteria. (Read much, much more about Ferrara and his ovens in this Eater feature from earlier this year.)

How does the Vetri family do rotisserie? On one seriously sexy grill/spit combo, its lower chambers stacked with firewood. During a pre-opening visit to the Navy Yard to check in on Lo Spiedo, we caught it being lit by blowtorch. (It's also featured in the lead image at the very top of this page.)

And on that rotisserie, one of our favorite uses of any of these beefy pieces of kitchen artillery all year: SPIT-ROASTED CABBAGES.

Not to be outdone, Luke Palladino posed alongside his own wood grill, in the kitchen at his new Italian steakhouse on East Passyunk.

Kevin Sbraga's third restaurant may be '80s-themed, but this centerpiece of a custom grill has 2014 written all over it. 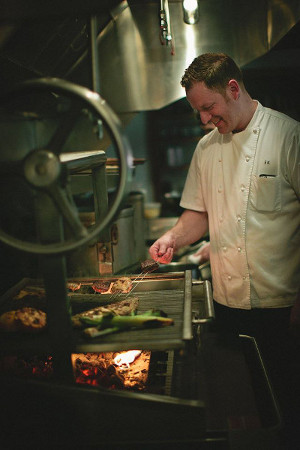 Fact: Charcoal used to be wood — or at least some of it was. But the more important thing about charcoal is that it fueled some of the year's best meals at the newly revamped A.Kitchen, where hardwood charcoal is the charcoal of choice.

Upon opening, chef Eli Kulp explained the choice thus: "The reaction of the juices and fats dripping onto the hot charcoal and the smoke that develops from it creates flavors in the food that other grilling techniques cannot." Once more for emphasis: Dripping juices and hot fats. What a year it's been.

Philadelphians also gained in opportunities to get really up close and personal with charcoal this year, thanks to grill-it-yourself Japanese barbecue spot Gyu-Kaku, which arrived in Philly this past summer.

Fire pits may not be kitchen equipment, and they may not necessarily rely on wood to keep the flame going. Still, they are literal pits of fire, and in this — as much the Year of the Beer Garden as the Year of Wood-Fired Appliances — they made a very respectable showing.

Whether at outdoor bars, seasonal pop-ups, outside at restaurants like Laurel or La Peg, or festivals, 2014 felt like the moment when Philadelphians finally got serious about some unspoken mission to gentrify the tradition of the South Philly trash can fire.

Sesame, Tripe, and Preserved Lemons: The Shared Ingredients Among Philly’s Most Popular Cuisines